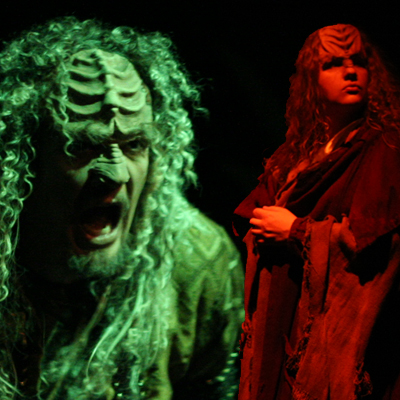 “Clever dialogue and plotting…funny even if [you’ve] never heard of Star Trek.”  – CityPages.com

“A lark done well.  If this is the kind of thing you like, you’ll like this kind of thing.”  – St. Paul Pioneer Press

The first play ever to be produced entirely in the Klingon language, the Twin Cities phenomenon A Klingon Christmas Carol has finally come to Chicago.  Scrooge has neither honor nor courage in this uproarious twist on the classic holiday tale.  Can the visits of three spirits help him to become a true warrior in time to save Tiny Tim from a horrible fate?  Find out in Commedia Beauregard’s melding of Charles Dickens’ morality tale with the language and culture of the Star Trek warrior race.  Performed “in the original Klingon” (with English subtitles provided for the benefit of audience members who don’t speak the language), this bizarre hit has earned itself a following of both Trek devotees and novices alike.

“Klingons wouldn’t care if Scrooge was not charitable or nice,” explains Commedia Beauregard Artistic Director Christopher O. Kidder.  “Instead, the spirits that visit our Scrooge are trying to help him become honorable and courageous, the two highest virtues of Klingon society.”

tlhIngan Hol (Klingon) is a fully functional language, invented for the Star Trek television series by philologist Marc Okrand.  The producers of the Star Trek franchise tasked him with creating a complete language that could be used by the bumpy-headed alien race that had become a major part of their science fiction universe.

As with any translation, working English into Klingon is not a precise process. Translating A Christmas Carol into the guttural warrior tongue was especially problematic for Commedia Beauregard because the Klingons have no gods and no Christ, hence no Christmas. The title of the play translates roughly as “Feast of the Long Night Song” and could most closely be understood to be more of a winter solstice carol. 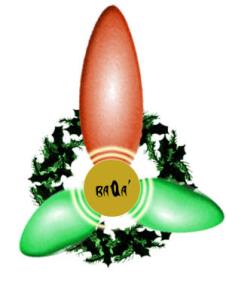 Special Performance Monday, November 29 @ 7:30pm
“Pay-With-Your-Can” Night
Pay-With-Your-Can night is a food Drive that benefits the Greater Chicago Food Depository. A person bringing in one non-perishable food item gets $10 off their ticket price. With three non-perishable food items, a person gets in free on that night. Pre-sale tickets for Pay-With-You-Can night may be made at full admission rate. In order to take advantage of this offer, customers must bring cans on night of performance on a first-come-first served basis.

Klingons and helping the needy. Is this a Christmas miracle?!